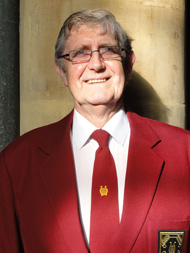 Eddy started singing at the age of three in the musical tradition of the Methodist Church. Both his parents sang with the local Methodist Church Choir and it was only natural that he would follow in their footsteps. It was not long before the choirmaster realised the quality of his voice and the chance of singing solos was soon being offered to this young man.

As a young boy he started learning to play the piano and took several Guildhall School of Music examinations. Eddy gained excellent results from these but the darkening clouds of the war years and other pressures disrupted his playing. He continued singing with the church choir and during those troubled times The Brixham United Choir was formed. This was made up of members from the various church choirs of Brixham Town. The choir produced over one hundred voices, which were able to tackle the large oratorios such as the Messiah, Elijah and Creation, bringing music to the people of Brixham.

After the war an American Evangelist visited Brixham and from that week of music The Brixham Crusade Choir was formed. This choir gave sterling service and expanded Eddy’s love of Choral Music for over ten years.

Eddy served in the RAF during his National Service. When he left after completing his service in 1954 he joined the Brixham Royal British Legion Band as a percussionist, adding yet another dimension to his musical experience. He played percussion with them for twenty-one years, together with his brother David who is now the Musical Director of the current Band.

Eddy started conducting around 1955, to help his father who organised the Methodist Church Harvest of the Sea service. This service is a feature of fishing communities throughout the land. By 1970 the Redemption Songs, which are a tradition of these services sung by a Male Voice Choir, had become so popular that Eddy was instrumental in forming the ‘Brixham Harvest of the Sea’ Male Voice Choir, and became their Musical Director.

Eddy married his wife Jean in 1958. Jean was a trained singer with a beautiful clear voice. During the next sixteen years this most popular choir presented Gospel Services throughout the Southwest. During this time Eddy’s wife Jean became the choir’s featured soloist, and with her beautiful clear soprano voice she enhanced every performance.

Eddy joined the Brixham Orpheus Male Voice Choir in 1975, with twenty five years as their Musical Director. In 2001 he stepped down to be replaced by Ron Burrington but has still continued to support the choir in the role of Assistant Musical Director. His encouraging smile and particular style has brought the choir great success and he is rightly respected for his hard work in producing concerts that attract a great rapport and a strong following wherever the Orpheus Choir sing.

In 2014 our long serving president Don Thompson stepped down from the position and Eddy was was made the new president at the 60th Anniversary dinner in his place.