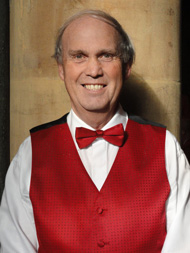 Ron was born in Plymouth on the 15th January 1947. At the age of eight he started his musical career by joining the “Methodist Church Junior Choir” on Embankment Road, Plymouth.

As senior school arrived, he went on to join the school choir as a boy soprano at the “Public Central School For Boys” in Plymouth. This was a choir of some note, often winning the all-boy four-part section of both the Plymouth and the St. Austell music festivals and also performing full stage versions of “Gilbert and Sullivan” operas. Ron took the part of “Peep-Bo” in the Mikado on one occasion. At the age of eight, he took up playing piano with lessons until he reached the age of eleven. Ron left school in 1964. He also took up playing the tenor horn at the age of eleven and played with the “Plymouth Silver band” for the following ten years.

In his early teens he graduated to the Senior Choir of the Embankment Road Methodist Church, singing tenor. He also sang with the “Embankment Singers” who regularly recorded with the BBC Light programme in their programme “Sing Us The Old songs” with Dudley Savage at the organ.

At the age of eighteen Ron started playing the organ for the congregation at the Stonehouse Methodist Church, Plymouth and stayed until finally leaving in 1971. His family moved to Orpington in Kent at that time, where he joined the Methodist Church choir and became the assistant organist, later progressing to become the church organist for the next six years, until leaving Orpington 1981 for Chesham in Buckinghamshire.

Arriving in Chesham in 1981 he become one of three church organists playing at the local Methodist Church. He could also be found playing at one of the local Baptist or Parish Churches as well as Amersham and the surrounding villages.

During this time at Chesham he took up conducting church choirs, and at this time he even found time to have a go at providing the musical accompaniment for Pantomimes!! In late 1995 he took early retirement from his job as a “Fellow of the Royal Institution of Chartered Surveyors”. One of the projects this talented man was involved in was the “New British Library” at St. Pancras.

At the beginning of 1996, Ron moved with his wife Cynthia to Brixham. His playing of the Church organ continued at the Brixham Methodist Church and also immediately joined the Brixham Orpheus Male Voice Choir as a second tenor.

Not content with singing in the Orpheus, he also plays the organ elsewhere in Torbay and the surrounding area. Ron regularly conducts church choirs at the festive periods of Christmas and Easter. Then, in 2000 he was the conductor and musical director of a cast of over eighty performing people at the musical “Hopes and Dreams” in Torquay, Devon.

Not long after joining the Brixham Orpheus Male Voice Choir in 1996, he became the “Assistant Musical Director” and organ accompanist of the choir, ultimately becoming Musical Director in 2005.

Since becoming Musical Director he has taken the choir to many venues around England and Wales and has visited Germany on two occasions to concerts with the BOMVC’s twin choir, the Liedertafel of Hameln.