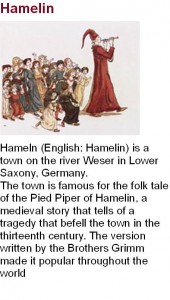 The BOMVC recieved an invitation to join the “Liedertafel Hameln von 1837” choir, to celebrate with them their 170th Choir Anniversary during October 2007.

Our visits to Germany have all brought their measure of fun and, of course, a few anxious moments, particularly for folk making their first trip but very soon everyone is enjoying the “Hamelin welcome” which always awaits us.

The Borough of Torbay entered into a twinning agreement with Hamelin, Germany, on 7th January 1973. The aim, nurtured between the two Boroughs, was to foster and promote as many exchanges as possible between a complete range of interests under the umbrella of friendship. Very many groups have taken advantage of these friendship links, eg, nurses, churches, schools and colleges, sports, fishing clubs and life-saving groups – the list is much longer. 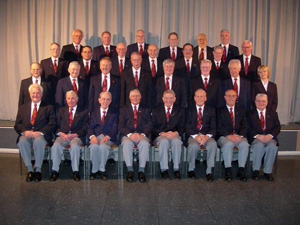 In 1974 the Orpheus recieved a communication from the “Liedertafel Hameln von 1837” male choir from Hamelin, asking if the BOMVC would be prepared to meet them, and share a concert with their choir. The Orpheus gave full support to the idea and our link with Hamelin began.

The Borough made the arrangements for the German choir’s first visit, and after our combined choir programme in the Brixham theatre, we were left with an invitation to visit Hamelin in 1975. From 1975 our exchanges became well-organised and both choirs enjoyed many, many happy times together, both here and over in Germany.

For this, the 30th year of our link with the Liedertafel, I thought I would list for your interest, all the dates the two choirs have met.