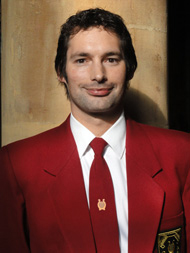 Marek was born and bred in Swansea and taught himself to play on an old out of tune piano rescued from a church hall. While studying for his “A” levels at Swansea College he became the principal College pianist in his spare time, playing for students taking music examinations etc.

At the age of 19 he was asked to play for The Belmont Singers on a trip to Spain. He stayed with them for several years before leaving Wales for Torbay where he works as a pharmacist in Brixham. For 10 years he had no room for a piano until marrying Katie and moving house. By sheer coincidence one of his customers is our Concert Secretary, and after speaking with him, Marek was invited to one of our practice nights and the rest as they say is history.